Wild Queensland: Photos and stories from my roadtrip north

May 24, 2022
Earlier this month, I drove up to Airlie Beach in the Whitsunday Region to celebrate the 40th birthday of my close friend, Kat.

Our time there overlapped for one weekend, in which we enjoyed swims, drinks, hearty dinners and a sailing adventure around the islands.

The celebrations and wonderful catch-ups flew by quickly, but when Kat and her husband Luke flew back down south on Sunday, I still had a week's worth of time at my disposal to explore the nature of Queensland's coast.

I started with a journey into the forests of Conway National Park, just a ten minute drive east of Airlie Beach. I spent a sunny, humid morning walking up to the peak of Mount Rooper, through vine scrub and eucalypt forest.

I immediately saw a new species of bird for me in the carpark there, a female olive-backed sunbird (Cinnyris jugularis). After so much rain earlier in the week, the forest floor was also teeming with amazing fungi!

After lunch back in town, I returned to the national park, this time to Cape Conway's lowland tropical rainforest. Here I had an up-close encounter with a gentle collared whipsnake (Demansia torquata), as well as green-spotted triangles (Graphium agamemnon) and yet more beautiful fungi.

Having had such a fantastic time with my friends and in the wilderness, I was sad to leave Airlie Beach the next day—which, I should mention, is the friendliest Australian town I have been to!

My next destination was Yeppoon on the Capricorn Coast, and after a day of driving, I arrived at my lovely AirBNB accommodation in Adelaide Park.

Because of the rain Queensland has been drenched with this year, I decided to forego murky marine adventures for more mainland exploration. I began the next day walking down gravel roads through the fog in Bungundarra, where I had my favourite sighting of the whole trip: a blue-winged kookaburra (Dacelo leachii)!

I have wanted to see this tropical species ever since I was a little boy! The bird I saw (a male, as told by his blue tail) allowed for wonderful views, and later I heard more of his kind uttering their strange shouting call from some paperbarks across a field.

The day offered delights in many other forms too, gifting me with my first sightings of the bar-breasted honeyeater (Ramsayornis fasciatus) and frilled lizard (Chlamydosaurus kingii) at Lammemoor, and then flocks of brolga (Grus rubicunda) at Emu Park. I finished the day by watching the full moon from Fan Rock Lookout, as it slid out from the sea to shine over the Great Barrier Reef. Truly magical!

After such a big day, I kept the next one simple, with a trip out to a tropical woodland at Lake Mary, followed by a dip in Yeppoon Lagoon, a man-made infinity pool by the shore.

My next port of call on the way home was Urangan at Hervey Bay, where I stayed two nights at my favourite little hotel. The weather started to turn here though, cloudy at first, before becoming persistent rain. I still enjoyed Hervey Bay though because I made the most of my time before the worst of the weather took hold, studying trees in a beautiful vine forest at Dundowran Beach. Here I got to know new species for me like the canary beech (Huberantha nitidissima) and pleurostylia (Pleurostylia opposita).
Finishing up in the forest, I went for a walk on the adjacent beach and found a magnificent osprey (Pandion haliaetus) perched regally on a bare branch in the dunes. It was surveying a landscape I would've liked to have studied also, but alas, that was when the rain began. The outdoors portion of my holiday was over.

May 17, 2014
I've never really taken much notice of plants until recently, regarding them usually as just the thing that a bird perches on while you're watching it. This week I decided it was time to change that attitude by trying my hand at plant identification in Denmark Hill Conservation Park, located in the centre of Ipswich. The park is just 11.5 hectares in size, but preserves a patch of bushland that acts as an 'island refuge' in a sea of suburbia. I did my best to focus on the trees and not be too distracted by birds or the resident Koala   (Phascolarctos cinereus)  population, and came up with nine interesting trees and plants seen on the Water Tower Circuit.
12 comments
Read more 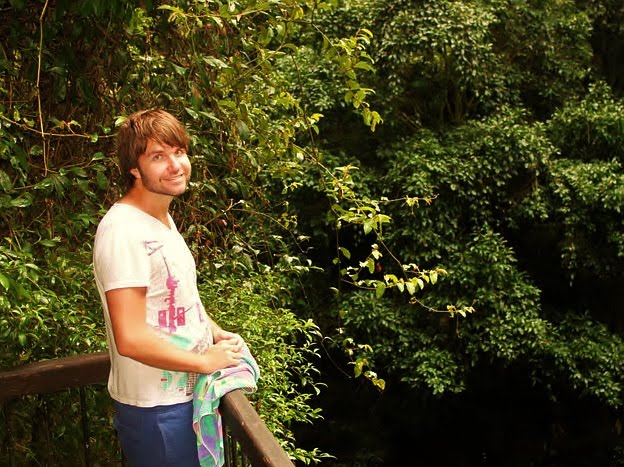